Steven E. Harris is a historian of modern Russia and Europe. He is presently researching and writing a new book, “Flying Aeroflot: A History of the Soviet Union in the Jet Age.” In 2016-2017, he was on leave to work on this project as a Verville Fellow at the National Air and Space Museum in Washington, DC. He also held a Waple Professorship (2016-2018) at UMW and received a summer stipend from the National Endowment for the Humanities in 2020 to advance work on this book project. See his most recent publications related to his project below. Drawing from this scholarly project, Harris has developed an upper-level seminar, “Empires of the Air: Histories of Aviation and Space in the Modern World,” which he taught most recently in spring 2021.

In 2012, Harris co-organized the Second World Urbanity project with Daria Bocharnikova (University of Leuven/Center for the Fine Arts BOZAR). This project examines the urban planning, architecture, and lived experience of cities past and present throughout the socialist Second World. This project has held four conferences, bringing together scholars from a range of disciplines who focus on cities from Havana and Dar es Salaam to Tashkent and Dalian. In 2018, a first set of essays based on this project was published in a special issue of the Journal of Urban History. For the introduction to this collection see, Daria Bocharnikova and Steven E. Harris, “Second World Urbanity: Infrastructures of Utopia and Really Existing Socialism.”

Harris teaches courses on Russian and French history, Stalinism, socialism, urbanization, conspiracy theories, and aviation culture. His research interests include mass housing, architecture, and urbanization in Soviet history and the Second World; aviation culture in the jet age; and transnational cultural contacts during the Cold War. His first book Communism on Tomorrow Street: Mass Housing and Everyday Life after Stalin (The Woodrow Wilson Center Press and the Johns Hopkins University Press, 2013) shows how Soviet citizens’ move from communal housing to the single-family separate apartment fundamentally transformed the post-Stalinist ‘thaw’ from an elite into a mass phenomenon.

Recently Taught Courses At a Glance 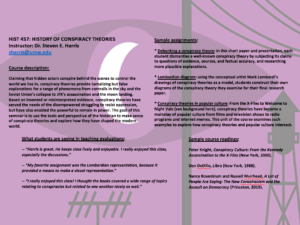 HIST 370: History of Socialism
HIST 457: History of Conspiracy Theories
HIST 468: History of Stalinism
HIST 471F2: Empires of the Air: Histories of Aviation and Space in the Modern World “The World’s Largest Airline: How Aeroflot Learned to Stop Worrying and Became a Corporation,” Laboratorium: Russian Review of Social Research 13, no. 1 (2021): 20-56. “‘We Too Want to Live in Normal Apartments’: Soviet Mass Housing and the Marginalization of the Elderly under Khrushchev and Brezhnev,” The Soviet and Post-Soviet Review 32, no. 2-3 (2005): 143-174.

“In Search of ‘Ordinary’ Russia: Everyday Life in the NEP, the Thaw, and the Communal Apartment,” Kritika: Explorations in Russian and Eurasian History 6, 3 (Summer 2005): 583-614.